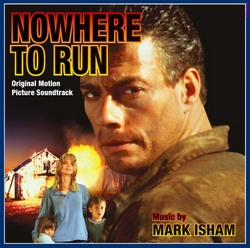 Perseverance Records is proud to premiere the release of the long lost soundtrack to the 1993 Jean-Claude Van Damme action film, Nowhere To Run.

Produced and released under license from Sony Pictures, this release marks the fifth movie soundtrack from a Van Damme action film released by Perseverance. It should be noted that each has sold very well and the reason for this is simple... Van Damme's films are cult classics and are still watched by millions yearly. Nowhere To Run was another in Van Damme's string of box office winners. For over a decade, he was the biggest action star in the world. Van Damme will be appearing in Sylvester Stallone's newest Expendables film, which is due out in theaters this year. This will only serve to generate more interest in his films and have more potential customers for the music heard in the movies.

The score was composed by Mark Isham. He was hired to score this film due to his marvelous work on films such as The Hitcher, Mrs. Soffel, The Moderns and the Oscar nominated A River Runs Through It, to name a few. Isham had composed scores for over 20 films before getting the nod to write the music for Nowhere To Run.

Besides writing music for movies, Mark has also had a very successful career in jazz music. He has released albums on Virgin Records, Windham Hill and his own label.