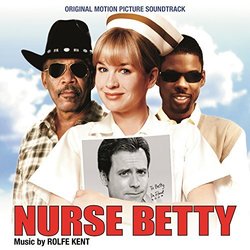 Audiences coming out of Neil LaBute's Nurse Betty have the odd sensation of having just seen two movies instead of one. The first is a dark, cynical comedy about a small-town waitress witnessing the brutal murder of her husband and her ensuing flight from the scene (and reality); the traumatized Betty (Renée Zellweger) crosses the country searching for her dream man, a soap opera character named Dr. Ravell (Greg Kinnear), not knowing her husband's ruthless killers (Morgan Freeman and Chris Rock) are in hot pursuit. The second movie is a life-affirming fairytale about a woman's escape from an unhappy, meaningless existence into a fulfilling, almost idyllic life. The film's duality isn't really bad - as a matter of fact, it's nice to see a dark comedy turn around and show us that yes, good things do happen despite all the bad. The soundtrack for Nurse Betty faces the challenge of tying these two halves together into a coherent whole. With various country tunes and golden oldies mixed in with a score by Rolfe Kent, it succeeds for the most part.

The source music includes a dark, faintly dissonant rendition of "Whatever Will Be, Will Be" by Pink Martini, which sets the tone of the film: romantic dreaminess mixed in with a palpable sense of menace. The country-western portion of the soundtrack, featuring tunes by Hank Williams and Eddy Arnold, add flavor to the cowboy assassins that pursue Betty and the Southwestern locales they traverse. As these tunes evoke an idyllic view of the west, the oldies from Ricky Nelson and Della Reese evoke the dreamy view of love that Betty feels for her fantasy lover, Dr. Ravell. This source music spices up the characters and settings, and better yet, enhances the ironic humor of the film.

The main objective of Rolfe Kent's score is to create a fragile, romantic undertone to the sometimes dark turns that the story takes. It achieves this with a sweet piano motif that appears periodically throughout the film. It is positive, sometimes uplifting, and good for keeping our hopes up when all looks lost for Betty. But its strength could also be viewed as a weakness. By maintaining the fragile, soft tone throughout, the score never really blows you away as a powerful musical work. Realistically, here the score is clearly intended to stay in the background in a supporting role, and for that, it works perfectly.

In the case of Nurse Betty, the music definitely fits the movie. If you are open to seeing and hearing something that is both brutal and life affirming, cynical and sappy, all at the same time, Nurse Betty (the film and the soundtrack) will be your cup of tea. With a running time of approximately 47-minutes, the album was released on Varese Sarabande Records.