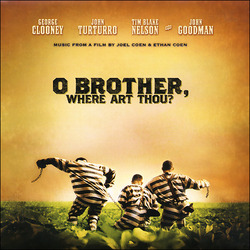 O Brother, Where Art Thou?

Review: O Brother, Where Art Thou?

The brothers' Coen bring us their latest comic masterwork in the form of a Southern-fried, Musical Comedy Fable, a sub-subgenre only they would dare tackle and only they could tackle it so well. O Brother, Where Art Thou is a loose retelling of Homer's "The Odyssey" set in 1930's depression-era Mississippi. The ensuing soundtrack album contains many songs from that era, and does an excellent job in bringing to life the sepia-colored fantasy film.

The 18 cuts on the O Brother soundtrack, culled from nearly 70 re-recordings of classic blue-grass and old-tyme music supervised by T Bone Burnett, is a wonderful and at times exhilarating trip through a period of music oft neglected by an MTV generation doped up on re-mixes, re-makes and soft-core rap/metal fusion. It is a breath of fresh air with wonderful recordings by John Hartford, Alison Krauss, Norman Blake, Ralph Stanley and others. The most recognizable track, "I Am A Man Of Constant Sorrow" appears three times, with three different recordings from: The Soggy Bottom Boys (George Clooney, John Turturro and Tim Blake Nelson lip synched version in the film), Norman Blake and John Hartford. Though clearly the most widely appealing song on the album, its triple appearance feels like padding in an otherwise beautifully constructed collection. Why not give the listener two distinct tracks rather than rehashing a recording that is already wonderful?

Aside from that odd decision, the remainder of the disc is lots of fun and a good change-up to the usual soundtrack efforts from most major studio releases. Tracks like, "Down To the River To Pray" (Alison Krauss), "Hard Time Killing Floor Blues" (Chris Thomas King) and "O Death" (Ralph Stanley) are standouts in an album packed with winners. T Bone Burnett has done a masterful job in assembling this soundtrack, and it should stand the test of time nicely. Pick it up, and after a couple of listens you'll be tapping your toes and searching for more.