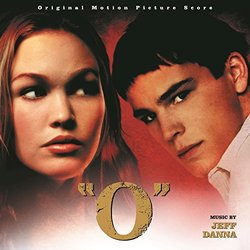 There is nary a bigger Danna fan than I.  Formerly, that statement would have been exclusively in reference to Mychael Danna, whose "romanti-minimalist" style has made him a definite favorite.  Until recently, my only exposure to his brother, Jeff, was his guitar work on Mychael's score for Girl, Interrupted.  His work on O has certainly piqued my interest in any other film scores he's got in the works.

After an excerpt from Verdi's "Otello" (and how can you go wrong with a Verdi aria?) Danna's score monopolizes the album.  With a theme introduced right at the outset, Danna sets the perfect tone for a modern Shakespeare picture.  His use of medieval instruments is dead-on; rarely have I heard Viols used to such effect, and more rarely when surrounded by a modern orchestra.  Danna's theme flows from track to track, never far from the forefront of even the most "ambient" cues.  The score has a forward momentum about it that keeps it moving even if its tempo rarely rises above an andante.

With definite stand-outs being "Hawk", "Victory and Defeat", and "The Scarf" - as well as the hauntingly sparse finale, "To Take Flight," this is a solid album, and a fine introduction to a composer who is well worth watching.