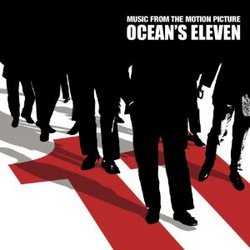 Very loosely inspired by the Rat Pack movie of the same name, Ocean's 11 director Steven Soderbergh (Traffic, Out of Sight) has managed to assemble a veritable "who's who" of Hollywood actors, including Brad Pitt, Matt Damon, Don Cheadle, Elliot Gould, and Carl Reiner. The story is fresh and engaging (since it has little to do with the original film), and the ensemble cast is fun to watch. Adding to the enjoyment (and the drama, when it occasionally sneaks in) is David Holmes' jazzy bass-heavy quasi-electronic score.

Bookended by the sweeping "A Song For Young Lovers" by Percy Faith, the soundtrack to Ocean's 11 plays with no breaks, segueing seamlessly from track to track in a progression that mimics the flow of the film. David Holmes' score is very similar to his work on Out of Sight, but with a more electronic edge to it. It's hard to categorize—it's got some jazz, but also a bit of trip-hop. Toss in a few Vegas source songs for added flavor, including some Elvis ("A Little Less Conversation"), Perry Como ("Papa Loves Mambo"), and even a little Quincy Jones ("Blues In The Night") and you have a well rounded album.

Probably one of the more annoying aspects of the album, at first listen, is the inclusion of dialogue. Almost all of the score cues by Holmes have some sort of dialogue from the film on it. Granted, the dialogue helps sell this album as a "story CD", and there is enough of Holmes' score represented dialogue-free over the course of the album that you get a sense of what it's all about without feeling taken for a ride. Capped off with a clean, five-minute long recording of "Claire De Lune", which worked exceptionally well in the film, the album does a wonderful job of taking the listener on the same ride that they would get if the saw the film. The only differences being that it's about one hour shorter, you don't get all the dialogue, and you're missing the visuals. I enjoyed the film, and the album, enough to recommend both—but you probably want to see the film before getting the album, to have a better appreciation of it.