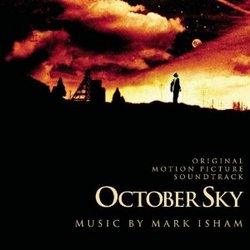 I was sitting in the theater in Richmond, VA, watching this film with my girlfriend about 2 weeks ago. The opening sequence shows men working around a coal mine in Coalwood, WV, where the primary action in the film occurs. The music accompanying this scene was a perfect time machine, transporting me back to those times. I did not work in a coal mine, but I grew up on the border of several towns that were once booming, because of coal and steel, along the banks of the Ohio River. I knew old coal miners and I knew something of their culture. My girlfriend commented that whoever wrote the music must have been a country boy: indeed. Well, actually he was born in New York. From an early age, however, Mr. Isham learned the violin, and that influence is displayed with radiance on this recording. Regardless of his birthplace, his talent for this type of music is evident in several of his other film scores, including A River Runs Through It and Of Mice and Men.

The main themes might make Isham sound like a country boy, but not a twangy one. The music here is reminiscent of something one might hear in old Civil War tunes. There is a strong use of fiddle in the opening tracks. It is used lonesomely, not joyously. You get the impression of the fiddler thinking sadly of old times.

The interesting device that Isham uses is to keep the music mournful throughout the overwhelming duration of the film. It seems that he had two possible courses of action. The first (and perhaps more obvious) would have been to create "uplifting" music which would fill the majority of the movie. He does use this towards the end of the score, and for one notable track in the beginning ("Searching for AUK 13"), but more often then not, he does not use that type of music. The second way to go, and the one he brilliantly chose, was to have the music fit not the theme of the film, but rather the film's backdrop: in this case, Coalwood. By doing this, he has created a striking contrast in the composition of the film itself, not just the music. The audience sees these young boys desperately clinging to a hope of "something better", while the music is a constant reminder of where they are, and what their chances are of ever leaving. There is a recurrent theme first displayed in track 1 ("Coalwood"), but it is not so repetitive as to be dull. He plays with this theme, but creates a real symphonic piece by the end of the score. On the CD, his score is broken up by various oldies songs scattered throughout the soundtrack, but the music he has written remains cohesive.

In addition to track 5 ("Searching for AUK 13"), there are about two other truly uplifting tracks. The most notable of these is track 21 ("Rocket Boys"). This selection takes off (no pun intended, I swear), and lifts the listener out of his seat. Considering the melancholy mood of the majority of the rest of the score, this section is all the more powerful. It is as though he has been saving his biggest punch for the end of the music, and boy does it deliver. Track 23 ("October Sky") is also more inspirational than much of the rest of the score.

Overall, I would say that this is an early front runner for next year's Best Score nominations for the Academy. Mr. Isham, thank you for another down to earth and heartfelt recording.