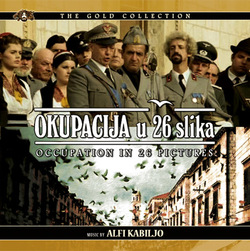 Okupacija u 26 slika (Occupation in 26 Pictures)

Kronos Records is very proud to present the soundtrack to the 1978 Lordan Zafranovic film Okupacija u 26 slika (Occupation in 26 Pictures).

Three young men - a Croat, an Italian, and a Jew - are the best friends in pre-WW2 Dubrovnik. When their country is occupied by Nazis and their cronies, the idyllic city becomes a place of terror and gruesome massacres. The friends must now take different sides in a global conflict.

The music for the film was penned by none less than award winning composer Alfi Kabiljo, with whom we already had already the privilege to work on Bahnovic Strahinja (The Falcon) and Nikola Tesla. Kabiljo penned an incredibly eclectic score, ranging from the highly dramantic touching moments to surreal pieces evoking some of the bizarre scenes of the film.