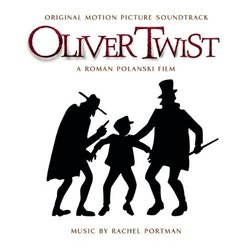 The literary works of William Shakespeare, Jane Austin and Charles Dickens exist in that special pantheon of being endlessly performed, re-imagined and reinvented on stage and screen. Every year it seems that you can find another presentation of their best remembered creations in local theaters, on public television and at the movies. And just when you think one of these stories has had its fair share of interpretations, along comes another, regardless of whether it adds a fresh perspective on the material or not. Controversial director Roman Polanski surprised many by tackling Dickens\'s Oliver Twist and staying true to the source in terms of time, place and characters, however redundant this might appear. Additionally, he made the safe choice of hiring Rachel Portman, a composer who has gained fame in scoring literary adaptations in a pleasantly engaging manner.

Her score for Oliver Twist starts with "Streets Of London", in which a solo trumpet is set against bright, surging strings in a presentation of the main theme, a rising, optimistic staccato line. The melody suggests positive motion, upward and onward, despite present circumstances and what may lie ahead. "The Road to Workhouse" begins with pensive strings, piano and solo clarinet before the main theme surges forth again, in a style somewhat reminiscent of Thomas Newman\'s work with strings and woodwinds only. Gentle harp and flute setup "A Kind Old Woman", while the main appears again stridently, first in strings only then assisted by oboe and clarinet, in "Oliver Runs Away".

"The Artful Dodger" changes the pace a bit with low woodwinds and strings sketching out a stuttering rhythm, almost comical due its slight off-kilter nature. Harp and clarinet open "Fagin\'s Loot", with a subtle, mysterious theme, picked up later by piano, flute and then is cut short by chopping, racing low strings for trouble brewing, no doubt. The Fagin theme is presented again in "The Game", with woodwinds set against syncopated, playfully menacing strings. "Oliver Learns The Hard Way" is the first lengthy track on the album, beginning in a slightly saddened tone before the pace quickens through staccato strings and woodwinds while the tone shifts from bright to suspenseful, a dangerous chase and then finally back to melancholy.

Churning, choppy low strings highlight the brief "The Escape from Fagin". Following this, an ominous, low register atmosphere dominates "Prelude to a Robbery" which logically continues into "The Robbery", another length track. In "The Robbery", the low ominous tone grows more intense as the strings and woodwinds slowly waver and rise, accompanied by a rolling clarinet line, before the cellos and basses break into slicing, syncopated action and push the cue to a close. This type of active, low string material also highlights a later track, "The Murder".

The low, ominous tone continues in "Wanted: Bill Sykes & A Fierce Dog", in this instance the horns provide extra menace to the strings in the guise of a new, 4-note motif. The last two tracks are both length, giving a healthy, extended close to the album. Tension begins "The Death of Bill Sykes", where the horns are again included and provide villainous material, as well as the 4-note Bill Sykes motif is passed between them and the strings. The choppy thematic material from earlier is then revisited in the cellos and basses as before, while the cue builds to one final statement of the Sykes motif. The story and the score wrap up in "Newgate Prison". Tentative yet thematic strings and clarinet start with material previously heard in "A Kind Old Woman" which blossoms into a fuller, richer presentation before the strident, bright main theme strikes forth once again to end it all in a fine fashion. The score would certainly be worthwhile for Portman fans to check out but while there is good melodic material there is also an over-reliance on strings and woodwinds, lending a sameness to many of the tracks.