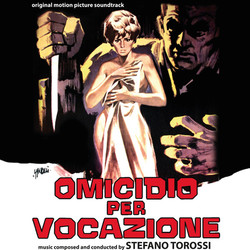 We are pleased to release on CD the complete edition OST by Stefano Torossi for the film Deadly Inheritance.

Torossi composed a lounge-style score where the Noir side of the story is contrasted with a danceable shake (Tr.1, Tr.2, Tr.3, Tr.5). There are also plenty of romantic themes (Tr. 4, Tr. 8) as well as an atmosphere of suspense typical of giallo films (Tr. 7).

Originally C.A.M. had released 8 musical selections on a promotional LP (C.A.M. PRE 2) paired with the OST from the film ("E' stato bello amarti"). This extremely rare vinyl was released for the first time on CD by Fin de Sičcle Media (FDS32) in Sweden in 2009.

For our CD we were able to access the master tapes in mono from the original recording session. We found some unreleased material such as fabulous Bossa, folk music, and other alternative and dance versions of previously released pieces—and all approved by Maestro Torossi.