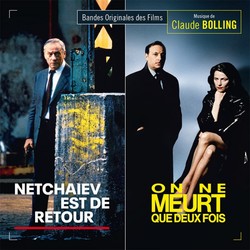 Adapted from Robin Cook's novel by Michel Audiard, On ne meurt que deux fois tells the story of Detective Staniland (Michel Serrault) investigating the death of a pianist. While conducting his investigation, he meets Barbara (Charlotte Rambling), the mistress of the murder victim who confesses to the crime. In order to translate the mystery surrounding Serrault and Rampling's characters, Bolling naturally thought of using the saxophone – the faithful companion of a film noir detective. He composed a score based on a shady theme introduced by two nebulous notes of bass flute and saxophone that evoke the cop roaming around.

Netchaďev est de retour, adapted from Jorge Semprún's novel, tells the story of the bitter reunion of Marroux (Yves Montand), director of the DST and Netchaďev (Vincent Lindon), his revolutionary son. Bolling composed a slow march theme accompanied by strings and woodwinds. The rest of the score is discreet and atmospheric mixing emotion and suspense.

This present edition features the remastered original LP program for On ne meurt que deux fois and the expanded score for Netchaďev est de retour, remastered from the composer's original master tapes. The package includes a 12-page booklet with liner notes by Gilles Loison, discussing the films and the scores.This is a limited edition of 500 units.