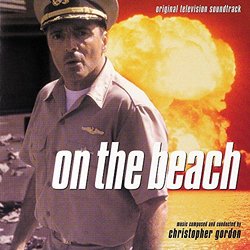 Review: On The Beach

The last time I actually had the opportunity to hear a piece of music by Christopher Gordon was when he did the music for the miniseries Moby Dick. I was pleasantly surprised by his enjoyable thematic style, and when I got On The Beach, I took note of Gordon's name, and hoped that the CD would provide as much enjoyment as Moby Dick. I was pretty much right. On The Beach is a Showtime original movie based on the book of the same name by Nevil Shute. The classic story about World War III had previously been made into a film in 1979 starring Gregory Peck and Ava Gardner. In this version, the leads are Armand Assante and Rachel Ward, and the film was directed by Russell Mulcahy (Highlander).

In the film, World War III has happened. Nothing is left of the world (more or less) except Australia. But their day is numbered since a massive wave of radiation in on it's way in. Some want to go north, where radiation might be weaker, but it's tough to know for sure without sending someone up there to check.

Beginning with "The World At War", Gordon provides us with his main dramatic theme from the film, a march that while hopeful and upbeat at its core, is ultimately laden with dark undercurrents. Much of the score is downbeat and sad, after all - there's not much hope left for the world! A solo cello plays mournfully in "A Matter of Months" and a religious choir sings in "Melbourne Decays". Rather depressing stuff, if you think about it. The Herrmann-esque moments in "Nordstrom's Theory" evoke images of the darker moments in Citizen Kane, but slowly the score begins to warm up and get happier. The aptly titled "Through The Darkness" is warm, lush, and optimistic.

"Moira and Towers Meet" is a fast paced, sweeping orchestral jaunt full of life and happiness as the film moves into the "romance" phase of the storyline. This romantic underscore continues on its merry way for a while, until "The Beginning of the End", at which point that solo cello comes in and ruins all of that niceness. Once a message from the north is received, however, the film takes on a more adventurous tone - the main title march pops in fully with "Prepare to Dive". "Swain Returns Home" is a very powerful cue, with full drama and sadness overpowering the listener. The full orchestra and choir are used for "Lacrimosa", which is great to listen to (as I am a sucker for choral music).

This is a rather dramatic score by Christopher Gordon, and with his adept use of the orchestra and choir, he provides just the right amount of emotion to push this cable-movie up another notch and make me wonder why he doesn't get more film work. Released on Varese Sarabande records, and with a full running time of 73 minutes, this is an album definitely worth checking out. It is a score that works well not only in the film, but equally as well on it's own.