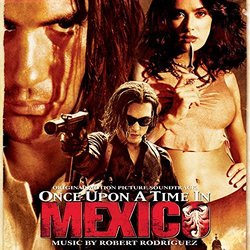 Once Upon a Time in Mexico

Review: Once Upon a Time in Mexico

Once Upon a Time in Mexico is suppose to be the final chapter of the El Mariachi; the penultimate action/adventure of the Mexican "Man with No Name" (played by Antonio Banderas). Writer / Director / Producer / Editor / Composer / Etc. Robert Rodriguez has grown much over his decade as an independently minded filmmaker, yet Once is the shortest and more fragmented movie of the series. This is a movie that is refined and sloppy at the same time if there is such a thing. Agent Sands (Johnny Depp) is the most interesting character Robert has created and deserves a movie series of his own. His character hints at a much better, much more organized movie. The movie also has the best score that has been in a Rodriguez film—one that possesses the soul the rest of the movie was reaching for.

The simple descriptor for the score would be big, bold and Leone-esque. I'm starting to use that made-up word too often but what other word can you use for a movie that has Once Upon a Time in the title? Like Sergio Leone's The Good, The Bad and The Ugly, the film takes its nameless mythical hero and puts inside of a larger political conflict. In addition, it takes much from Ennio Morricone's influential Spaghetti Western scoring style.

The album opens with a fantastic rendition of "Malague�a" by, of all people, Brian Selzer. It immediately communicates the two themes of this album: Mexican Pride and good old fashion Rock and Roll. Other tracks by Del Castillo ("Dias De Los Angeles"), Manu Chao ("Me Gustas Tu"), Marcos Loya ("Yo Te Quiero") and others continue this theme. Frequent member of Rodriguez's stock company Tito Larriva (from Tito & Tarantula) appears in "Flor De Mal" (with Steven Hufsteter) in his trademark slow burn sensual rhythms. As she did in Desperado and Frida, Salma Hayek contributes her smooth sexy voice to "Siente Mi Amor". There's also Juno Reactor's "Pistolero," with its trance mixture of Spanish vocals and flamenco guitar by Steve Stevens. It seems like a song written for a Rodriguez movie even though it is several years old—and was used to great effect in the trailer campaign for this film.

And all of these pieces blend well with Rodriguez's score. Rodgriuez's music, as I have said before, is not particularly deep or complex. But it is always has a playful gusto. The arrangements mostly consist of orchestra playing in contrast to a single guitar, which vacillates between being either acoustic or electric. If you have ever seen behind-the-scene footage of Rodriguez, he takes a guitar everywhere, strumming it every extra second he has. He has it in his blood, so to say. The score is an extension of Los Lobo's score for Desperado, only now on a grander scale. What is impressive at this point is Rodriguez's range, be it the intimate "El Mariachi" or the grand "Guitar Town" that opens the film. Even the action set pieces ("Church Shootout," "Coup De Etat," "Mariachi Vs. Marquez") are lusher than anything we've heard from Rodriguez before.

One rather unique feature is Rodriguez's continued willingness to collaborate with other musicians, as Rodriguez states in the liner notes, Actors Antonio Banderas, Ruben Blades and Johnny Depp provided music specifically for their characters. Blades came up with his character's bass line motif and Banderas embellished his own theme. Depp's piece, "Sand's Theme" is performed by the amusingly named Tonto's Giant Nuts and merges perfectly with Rodriguez's score, so much that Rodriguez uses the theme in "The Man With No Eyes" and "Chicle Boy."

Like Desperado and From Dusk till Dawn, the album is peppered with hip, clever Tarentino style audio clips from the film including my favorite: "Are you a Mexi-CAN or are you a Mexi-CAN'T?" As a Texan, I think I can recommend this album. As a reviewer, I doubly can.