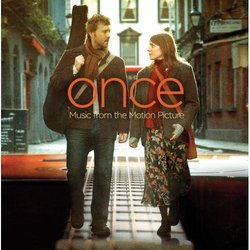 Once is a fabulous film about two musicians, one Irish and the other Czech, who meet on the street and eventually form a multifaceted partnership. In opposition to those musicals where the very existence of song invokes a suspension of disbelief, this movie's use of songs instead feels natural. This stems from the simple fact that the characters are themselves singers who are observed performing over the course of the film. As a result, the musical numbers are performed in-character and don't come across as outside of reality.

Best described as acoustic, melodic rock, the soundtrack album's songs are superb when listened to on their own. This certainly stems from the production decision not to cast actors to sing, as in Walk The Line, but rather to obtain instead singers who act. More specifically, the character of "the Guy" was portrayed by Glen Hansard, who plays with The Frames, an Irish rock group. Likewise, "the Girl" was played by Markéta Irglová, a Czech musician who collaborated with Hansard on his 2006 album The Swell Season. This casting results in a film so enjoyable that it itself is worth watching to see these actor-singers emote while performing them.

Standouts on the album include the duets “Falling Slowly,” “When Your Mind's Made Up” (these two songs can be found both on The Swell Season and The Frames' The Cost), and “If You Want Me.” For those who enjoy solo singers, Hansard's anguished "Say It To Me Now" or Irglová's haunting "The Hill" are both intensely lyrical. Injecting a personal note into this review, I must state that I am now motivated to find more music by these two artists and their collaborators. The soundtrack to Once merits an unqualified five out of five stars and will assuredly be found on many best-of-year lists in December 2007.