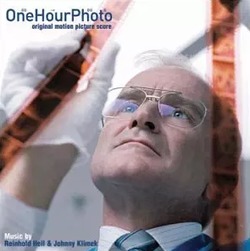 One Hour Photo, the chilling psychological drama from video director Mark Romanek, is a well-honed study of a troubled man's desire for contact with other humans.  The music, by Reinhold Heil and Johnny Klimek, though often pedestrian, is still very effective in creating a steadily increasing sense of dread.

Robin Williams plays a lonely man, Sy, who works at the one hour photo lab of a large, sterile, Wal-Mart-like store.  Sy has grown inordinately attached to a well-to-do family, the Yorkins, and tries to insinuate himself into their lives.  This effort comes to a head when he learns of the husband's infidelity and decides to do something to "save" the family.  Though ultimately a limited piece, this film is effective in conveying both a healthy dose of dread as well as a compassionate view of a desperately isolated, troubled man.  Such a combination is not an easy task.

As one listens to the soundtrack, Heil and Klimek's music becomes progressively less traditional and soft and instead more electronic and edgy.  It often implies a sense of "isn't this nice, but something is going on underneath".  Romanek's piece challenges the composers to start light and easy and build to something sinister and scary, and for the most part, the music succeeds.

The negatives here are relatively minor.  It sometimes veers a little too far toward the dissonant music box sound, but never too far.  It would be hard to say the music is inspired and/or truly memorable, but that's okay, as it still works, and effectively shows a solid progression from "normal" to scary.

Some electronica fans might enjoy the soundtrack, but for the most part, it is mostly for fans of the film.  Traditional Hollywood score fans will not find much here to suit their tastes.  Again, that’s okay, as it is a soundtrack that ultimately does its job.