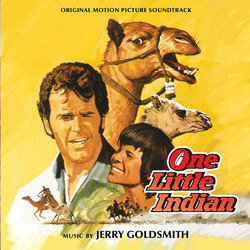 Intrada announces a reissue of an earlier Special Collection release that went out of print virtually overnight—One Little Indian. Featuring updated packaging and slight remastering, Intrada offers one of Jerry Goldsmith's more charming scores for this Disney film. It was the first of a handful of projects Goldsmith composed for Walt Disney Studios, writing a full-blooded, energetic western score, including an exciting main title that immediately establishes a bold, exciting sense of adventure. If there's a Disney touch to the score, it's in Goldsmith's sometimes sly, often brash approach to the physical comedy in the film and, in particular, the incongruous presence of the two camels. Goldsmith has sitar play the familiar first five notes of Maurice Jarre's Lawrence of Arabia theme, and he provides a rambunctious, muted cornet tune for the animals. It all comes together into one of Goldsmith's most adventurous, spirited scores of the 70s and one of his strongest western efforts.

For this reissue, Intrada has done minor remastering, using the 35mm 4-channel session tapes vaulted on 2" tape and mixed by Bruce Botnick to present the complete score in crisp stereo sound.