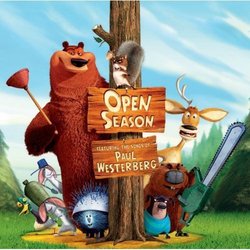 Similar to indie singer-songwriter Ben Folds\' contributions to the animated Over the Hedge earlier this year, Paul Westerberg of The Replacements provides the bulk of songs to the soundtrack of another "animals vs. people" feature-length computer-animated film, Open Season. His voice and instrumentation provides the anchor for a decidedly fun compilation of rock songs that also includes tracks by Deathray and the Talking Heads.

"Meet Me in the Meadow" opens Westerberg\'s collection with a rollicking beat and a catchy melody, followed by his "Love You In The Fall". What these and other Westerberg songs confirm is the singer-songwriter\'s ability to deliver strong hooks that are hard to let go of. Tracks like "I Belong" and "Good Day" showcase Westerberg\'s more low-key and reflective lyrics and instrumentation, which serve as a good balance between the faster-paced songs that dominate the album. Another highlight is "Right to Arm Bears", which features some interestingly edgy lyrics for a kids\' movie that are nonetheless quite clever.

Deathray has two contributions: "I Wanna Lose Control (Uh Oh)" and "Wild As I Wanna Be", the first of which is firmly set in the early 1980s new wave style of electronic-heavy instrumentation, while the latter fuses traits of the first with a more mainstream rock sound. They\'re both quick and breezy, but definitely catchy, as is the Talking Heads\' "Wild Wild Life", an amusing pop romp. Pete Yorn offers a reprise of Westerberg\'s "I Belong" as the closing track, finishing the album on a gentle note.

Open Season is a somewhat short album, but it\'s a balanced compilation that leads seamlessly from song to song (but is missing Ramin Djawadi\'s score). On top of that, Westerberg is wholly true to the musical persona he\'s known for, making this soundtrack a pleasant listen for fans of Westerberg, The Replacements, the film Open Season, or none of the above.