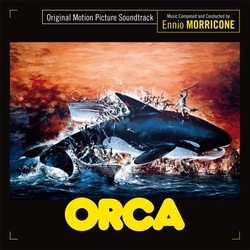 One of the most captivating elements of Orca is its beautiful and haunting score. Ennio Morricone navigates around the genre's musical clichés to give both dissonant fierceness and mournful beauty. He also gives the killer whales a "voice" which in turn lends the film an ethereal and almost dreamlike quality. The talented Edda Dell'Orso, who has contributed amazing vocals to countless Morricone tunes, gives especially haunting power to this score.

This new Music Box Records CD features the same content as the original LP program released on the TAM label in 1977 and also includes as a bonus track the theme song (My Love, We Are One) performed by American singer-songwriter Carol Connors. As the complete recording sesssions could not be located, Music Box Records was only provided access to the original album master tape vaulted at Warner Chappell Music France, except for the theme song mastered from the best vinyl source available. Due to certain imperfections existing on the album master, every effort has been made to minimize them and to improve the sound.

The CD comes with an 8-page booklet with liner notes by Daniel Schweiger, discussing the film and the score, as well as offering a new interview with Carol Connors on her Orca tune.