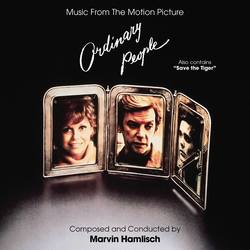 Ordinary People / Save the Tiger

Hamlisch demonstrates remarkable prowess as a dramatic film composer, whether it's expertly adapting Pachelbel's "Cannon in D" for Ordinary People, or effectively evoking big-band and jazz nostalgia in Save the Tiger—his scores are the perfect compliments to both great films. Produced by Dan Goldwasser for La-La Land Records and mastered by James Nelson, this special limited edition of 1500 units features bonus tracks, (including source and alternate cues), and exclusive, in-depth liner notes by writer Jeff Bond. Sharp art direction by Goldwasser wraps everything up in attractive fashion. A must for film music enthusiasts.