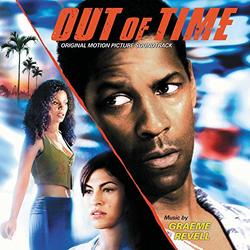 Review: Out of Time

My personal experiences with Graeme Revell's films scores have been of the hit and miss, hot and cold variety.  The Crow was my first album of his I purchased and he had me hooked, back in 1994, and since then I have checked into his work from time to time and either been absolutely elated, as with Street Fighter, The Saint and Red Planet, or quite disappointed, as with The Craft, Titan AE and Daredevil.  From reading interviews with Revell, I know he is more interested in odd sounds and textures than he is traditional melody and orchestral instrumental groups, but he can excel at the latter qualities so effortlessly that I guess it is too much for me expect him to always work in that capacity.

Out Of Time is the recently released Denzel Washington potboiler, in which he plays a detective who is both guilt and innocent of particular crimes.   The reviews were favorable overall and I am sure that Washington is as appealing as always, but I did not bring myself to screen the Miami-based murder mystery.  So I am sampling Revell's work on its own and it sits firmly in his ethnic yet melodic category.   The hub of the score is a breezy salsa and rhumba concoction, utilizing acoustic guitars, xylophones, shakers, bongos, solo trumpet and various South American percussion instruments to set the sound of heated South Florida.   It certainly is catchy and rhythmic and those listeners into Latin percussion ensembles will enjoy this aspect, but sometimes the short tracks ("Matt's House Boat", "Buddies - Matt and Chae") prevent complete satisfaction in terms of getting into the groove.   There is a synth element present in some tracks, counterpoint to a bluesy trumpet line.  Several tracks ("Domestic Violence, "The Fire") make use of the standard string section, but they do little more than set a static mood.   This type of scoring, found most often today in television, usually works fine with the picture since it does not detract and simply adds a layer of sound to the images, but can be flat and dry when heard alone.

The "Out Of Time Theme" is given several permutations (trumpet mix, guitar mix, Robert Revell mix), either because Revell felt the theme could handle the workout or there was not enough of the score to pad out the album.   Whatever the case, the multiple interpretations prove to be the most enjoyable tracks, most likely due to the well-rounded presentations, infectious grooves and mad trumpet performances.  "Saying Goodbye" and "Night Beat" are also both remixes and standout selections, the former a smoldering piece for strings, jazz combo and voice, while the latter is a dreamy mid-tempo mix of electronica, Spanish guitar, synth and solo female vocal which has a very South Beach flavor.    I would recommend this album first to Revell fans for these remixed tracks, as well as to those curious about the Latin influences in the music, but the actual score tracks are only of infrequent interest.