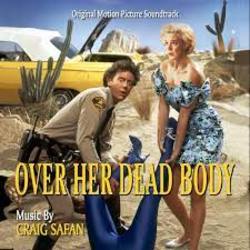 Over Her Dead Body

Released in 1990, Over Her Dead Body, also known as Enis Is Sleeping, revolves around two sisters named Enid (Mueller) and June (Perkins). Enid is shackled to Harry (Reinhold) in an unloving marriage and returns home one day to find her husband in bed with her June. In a fit of violent rage, Enid whips out Harry's pistol preparing to fire when June smashes a vase over her head, apparently killing her stone dead. In a state of guilt-stricken panic, the pair conspire to make it look like Enid's death was an unfortunate accident. Like Weekend at Bernie's, hijinks ensue when Harry's partner Floyd (Jones) unwittingly becomes involved.

The wonderfully off-kilter and eclectic music for Over Her Dead Body was composed by Craig Safan, known for composing quirky and unique scores, often with unpredictable combinations of instruments that defy expectations and barricade conventions. The score was recorded at The Village Recorder in Los Angeles with Joel Moss engineering the sessions.