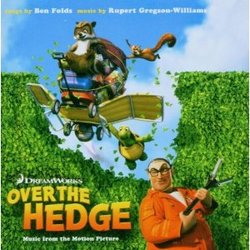 Review: Over the Hedge

Over the Hedge is a computer-animated film based on the popular comic strip of the same name. A satirical look at suburbia, the comic strip usually discussed pertinent issues involving a sly raccoon RJ, a cautious turtle, Verne, and a slew of supporting characters. In the feature film, we see how RJ and Verne & Co. all came together: RJ (voiced by Bruce Willis) accidentally destroys Vincent the bear\'s (Nick Nolte) stash of food for post-hibernation. He is then ordered to recover every single item within two weeks - or else Vincent will eat him. Meanwhile, Verne (Gary Shandling) and his "family" (consisting of other woodland creatures) awake from their hibernation only to discover that the woods they live in has been developed into a sprawling suburban hell. RJ encounters the group, and formulates a plan to exploit them to get the items on Vincent\'s list. But in the process, he might come to discover that being independent isn\'t all it\'s cracked up to be, and having a family can enrich one\'s soul.

The music for the film was provided by two talents: Rupert Gregson-Williams wrote the orchestral score, and Ben Folds wrote and performed songs. Folds does a nice job echoing the messages portrayed on screen, and provides an "inner voice" for RJ. The album starts off with "Family of Me", an upbeat song about how great it is to live alone. As the album progresses, the music bounces between songs and score, weaving a pleasant journey that follows the film.

Gregson-Williams\' score works well in the film, and he has some standout moments. The solo female vocalist in "Lets Call it Steve" adds a sense of wonderment and mystery to the scene where Verne and his family discover the hedge. "Play?" is a rather jubilant orchestral romp that builds to a frenetic and explosive climax. The final score cue, "RJ Rescues His Family" is a triumphant and energetic piece that ends heroically.

What the score doesn\'t have too much of, however, is an emotional edge - that is actually provided through the songs. The key one being "Still", a tender ballad that is very nicely performed and the background music is pleasantly orchestrated. Look for this one to get an Oscar push this winter. "Rockin\' the Suburbs (Over the Hedge Version)" is a peppy rock number that runs through the end credits of the film - and features William Shatner (who provides a voice in the film) doing the "Shatner thing". It\'s an amusing track, but it\'s placement in the middle of the album is a bizarre bit of sequencing.

Over the Hedge was a fun film that had a nice blend of score and songs to provide the necessary emotional underscore. Separate from the film, the album plays rather well, and the songs don\'t stick out at all. Rather, they complement Gregson-Williams\' score, which doesn\'t have anything overtly amazing about it, but it all works fine and provides an enjoyable listening experience.