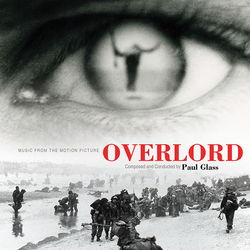 Director Stuart Cooper is the common thread for these releases.

Paul Glass' music for Overlord is one of the movie's strongest assets, a film music masterpiece—a melancholy, elegiac and at times dissonant tone poem that is both exquisite and hugely moving. The score's main theme is hauntingly beautiful and is used throughout the film to great effect. There are other themes that weave in and out, each creating a perfect musical landscape to go along with Cooper's visual landscape. It is an astonishing piece of work and we're thrilled to finally give it its world premiere release, on the 70th anniversary of D-Day and in conjunction with the film's Blu-ray release on Criterion.

Hustle, a sexy made for TV neo-noir thriller (shot in Toronto), reunited Cooper and Glass. This was a completely different kind of score for Glass—bluesy, sexy, sultry and dripping with eroticism. It has a beauty of a main theme, but, like most Glass scores, also has moments of dissonance and off-kilter writing.

The Disappearance, the tale of a hit man for an international assassination agency whose wife has disappeared, has a score by Robert Farnon, who used the Ravel Piano Concerto in G major as the basis for his score, but there's also original Farnon music, too—it's all of a piece and compliments the film perfectly.

Overlord and Hustle were transferred from Paul Glass's personal tapes, which we got in the nick of time—they transferred perfectly but as soon as they came off the machine they were literally falling apart. Both scores are in beautiful stereo sound. Sadly, no one, including the Farnon estate, was able to locate any original scoring tapes for The Disappearance, so for those cues we used the film's mono music track, but thanks to mastering engineer James Nelson, it all sounds excellent.