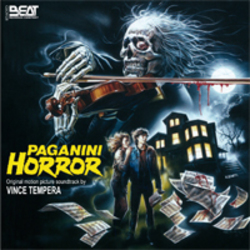 Beat Records is pleased to release for the first time ever the original soundtrack by Vince Tempera for the film Paganini Horror by Luigi Cozzi. The soundtrack consists of songs played live with a rock band from Milan and other moments where synthesized music is played by the oscillators on which new sounds were invented and filtered.

Now available in our CDCR series with a 12-page booklet designed by Alessio Innuzzi using original key art, liner notes (in Italian and English) by Luigi Cozzi and Vince Tempera and mastering by Enrico De Gemini.