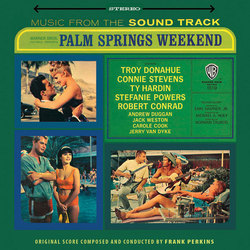 The 1963 Warner Bros. soundtrack album from Palm Springs Weekend was roughly one third songs (performed by popular young stars of the era) and two thirds original scoring by Frank Perkins - a meld of danceable numbers and orchestral background music. This premiere CD release on Intrada presents the complete Warner Bros. album, newly mastered from the Ľ" 15 ips stereo album master made at that legendary studio on September 19, 1963.