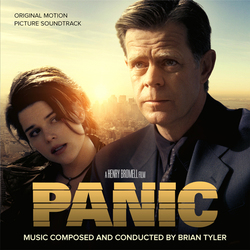 Howlin' Wolf Records proudly presents two scores on one CD by composer Brian Tyler - Panic (2000) and Fitzgerald (2002). This album is a tribute to the friendship and collaboration between filmmaker Henry Bromell and Brian Tyler. Both Panic and Fitzgerald (aka The Last Call) are largely considered by many fans to be some of the composer's most important work.

The first half of the album features music from Panic (2000), a psychological noir thriller starring William H. Macy, Neve Campbell, Tracey Ullman, John Ritter and Donald Sutherland. Recorded with a 40 piece orchestra, the thematic score is sad, romantic, and personal.

The second half of the album contains music from Fitzgerald (2002), a film starring Jeremy Irons, Neve Campbell, and Sissy Spacek. This Emmy nominated score features a jazz ensemble and chamber orchestra that flows freely with a strong jazz presence and occasionally detours towards the atonal side. Composer Brian Tyler wanted jazz to represent the time period F. Scott Fitzgerald was writing in and dissonance to reflect the writer's drunken stupors.

For years Panic and Fitzgerald remained absent from the composer's discography. In order to make this album extra special, Brian Tyler has personally expanded and remixed Panic.