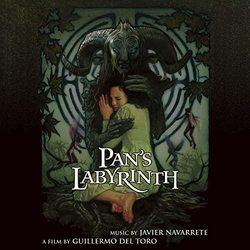 Some composers work best when given intricate characters to musical portray. Some composers need fast action and large explosions to fire their creative juices. Some composers rise to the occasion with stately dramas which call for them to replicate historical periods. The resulting scores in these genres are always excellent because they represent a composer working at his or her best, but of all genres, the one that seems to me to bring out the most beautiful and, often, the most exotic, is the fantasy.

There are not many composers who excel in this genre, and, frankly, there are few directors who do so as well. But the mixture of stunning visuals, odd characters not found in ordinary life, and stories that take surprising twists and turns can bring to life the richest and most detailed of scores. This is why I initially approached Pan\'s Labyrinth with excitement, but it was colored by a bit of trepidation. The movie is the latest film from Guillermo Del Toro, perhaps best known in the United States for Blade II and Hellboy. Both of those films incorporate sumptuous visuals and enough flights of imagination that I knew Del Toro could easily craft a wonderful fantasy film. But I was surprised that Marco Beltrami, his usual collaborator, wasn\'t on the project. Instead, Del Toro turned to Javier Navarrete, the man who has scored all of the director\'s Spanish-language films, and a composer I had never heard before. Perhaps, like me, you did not know that Del Toro still crafts movies in his native tongue, movies like 2001\'s El Espinazo del Diablo (The Devil\'s Backbone). Pan\'s Labyrinth, then, should be called El Laberinto del Fauno.

By either name, Pan\'s Labyrinth is a triumph. It is a fairy tale for adults, effortlessly tying together the real-life horrors of World War II-era Spain and a child\'s magic land, the Spanish resistance and a girl\'s quest to complete three tasks. It is a rich, complex, deeply symbolic movie, and is already in the front running for major awards worldwide. Navarrete has met Del Toro\'s triumph step-for-step with a haunting, lyrical score that far surpassed my expectations. Navarrete manages to do something few composers, who are usually concerned only with thematic cohesion, accomplish - he foreshadows. The second cue, "The Labyrinth," maps out the movie\'s journey perfectly, letting us know both how the score and the movie will play out. It is a marvelous example of compression. The cue opens with a solo piano playing a sparse theme high in the piano\'s register that is nostalgic and full of innocence. The piano is answered by the basses, a short interruption that exists as a premonition of things to come. The piano then returns, accompanied by the strings this time until the basses interrupt again and help establish a martial melody. This martial melody quickly morphs into the main, waltz-like theme, slowly growing until, halfway through, the piano\'s theme, even more elaborated, enters anew. Like the layers of an onion, Navarrete is revealing the movie\'s progression, leading up to the darkness that finally engulfs our heroine represented by a deep, bass chorus chant. The cue ends cyclically with the return of the opening theme, but its sweet nature is darkened by the innocence lost as the bass chorus rears its head at the end.

The rest of the score follows the progression outlined by that one cue. Melodically, it is based on a simply lullaby in 3/4 time - the waltz theme I mentioned above. The lullaby first enters as a vocal solo in "Long, Long Time Ago," sung by Lua, but the clearest example of it is in the solo piano version of "A Tale," where it has already taken on sinister connotations. Thos connotations are explored to their fullest when the lullaby is taken up by the full orchestra towards the score\'s end in the wrenching "Ofelia," named after the film\'s protagonist. The melody enters its most beautiful version in the cue that immediately follows, "A Princess," but it is a beauty tinged with sorrow, completing the journey outlined in the "The Labyrinth" as innocence gives way. Navarrete even underscores this by having the lullaby\'s vocal version return halfway through the cue.

Pan\'s Labyrinth is an impressive achievement, ably complementing and extending the visuals. But it is not a perfect score. Like many fantasy composers, Navarrete sometimes resorts to hokey clichés, such as the atonal buildup to an immense brass, string, and piano cluster at the end of "A Book of Blood" to signify terror, and the eerie, unhuman percussion that weaves its way through the dissonance of the cue aptly named "Not Human."

Still, this is a small reservation. Navarrete has created a score with a consistent aesthetic that draws you in and reveals deeper connections with each subsequent listening. I look forward to discovering the sound of the movies he has scored since breaking into the business twenty years ago, but for now, Pan\'s Labyrinth still has secrets left to discover.