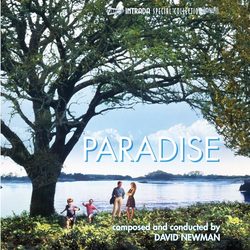 In the 1991 film Paradise, composer David Newman provided rich Americana writing with an emphasis on transparent ideas and dramatic melodies for the film. As Variety writer Lawrence Cohn wrote, "David Newman's warm musical score is a key contribution." Newman responded to the story with a poignant theme for Willard, introduced first on piano over oscillating strings, then blossoming on celli. The melody's orchestration adapts to its purposes in the story, from young Willard's wide-eyed bus trip to Lily and Willard's budding friendship. The score is a rich, emotional experience, ranking as one of Newman's finest works.

Robert Folk's score to Can't Buy Me Love plays in contrast with an emphasis on breezy melodic lines with hints of subtle dramatic content. Using strings for emotion, Folk assigned a lot of the score to radio-friendly instruments like guitar, bass, synth, harmonica, and a rhythm section. The main theme bounces and rocks initially as Ronald enjoys his new-found popularity, waxes romantic as Cindy begins to fall for him, and bemoans his state as he loses Cindy and his status. His banishment to social "Siberia" is accompanied by a hangdog harmonica tune with rock accompaniment and percussion.

Both scores are presented complete on this limited edition from Intrada.