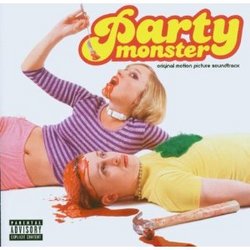 The New York club scene is a odd mixture of high and low. The highest of pretension with the lowest of standards. As the one song on the album preaches repeatedly as its motto, "Money, Success, Fame, Glamour." Michael Alig was a man who wanted to be a king of this scene and he did it through throwing flash parties, giving out a lot of drugs, and bashing a guy in the head with a hammer then injecting him with draino. While the movie charts the rise and fall of Aligs, this album charts that transition from 80's New wave music to early 90's trance, house and finally transforming into electronica. From New Order to the Chemical Brothers, this is a very rich genre of popular music to explore and it was tackled very well in Machine Soul, the 2 disk set compiled by Moby a while back.

The music of this soundtrack is representative of the characters the movie follows; flashy, sarcastically campy and shallow. It feels like music you would feel the beat to, dance to the rhythm and then forget the moment after you leave that club to go to a cooler one. Not to discredit the tunes on the album. There's more than a few flakey 80's pop hits here: Stacey Q's hit "Two of Hearts" (1986), Tones On Tail's "Go!"(1983), Shannon's "Give Me Tonight" (1984), ABC's "How to How to be a millionaire" (1985), and cult English hit "Kiss Me" (1982). In addition, there's some nice modern tunes: Miss Kitten's novelty hit, "Frank Sinatra", Ladytron's retro-cool "Seventeen", the the Chemical Brothers inspired "Crash" and a great capper to the Album, "Good is Bad, " which summarizes the moral stance on the movie nicely.

If those tunes make the album worthy enough to get, then I say go right ahead and pick 'er up. For those that aren't interested, I say avoid it. The rest of the tracks are only filler. Mostly modern bands writing retro music. Scissor Sisters do a serviceable Pet Shop Boys take off, while "Le Rock 1 " pays homage to trash house and "You're My Disco" does so to New Wave. Mariyln Manson contributes to yet another forgettable song to a soundtrack album this summer ("The La La Song"). There's some catchy beats, but nothing exceptional.