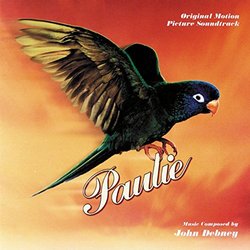 PAULIE tells the tale of a parrot searching for his rightful owner. A film geared for children, and released by DreamWorks, the score needed to be something powerful, yet light. Who better to pick then John Debney. Debney has written scores to JETSONS: THE MOVIE, "SeaQuest DSV", WHITE FANG II, and LIAR LIAR. As such, he is no stranger to scores that require a softer touch, while still providing a large orchestral feel.

It is with that touch that we first begin the Varese Sarabande's release of the score. "Paulie Medley" exposes us to most of the themes present in the film - a light piano bit, accordians, a string and cello bit, and of course a full orchestra. Zany at times, but always caring, the themes generally fit the action and are pleasing to listen to.

It is unfortunate, however, that with a running time of only 29:31 the inclusion of a few songs drastically reduces the amount of score on the CD. While the songs are amusing, and fit well into the film, it is a shame that more of Debney's score was sacrificed. But as they say, it's better to have some score than none at all.

PAULIE is a nice inclusion to any soundtrack collection - it's just a pity it's so short.