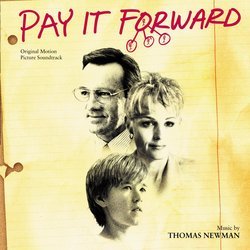 The film Pay it Forward was sadly not received well by the critics, or by most of the world. The film stars the great Kevin Spacey as Eugene Simonet, a school teacher with Helen Hunt as Arlene McKinney, a mother struggling with men, work and life in general, and finally, with Academy Award nominee Haley Joel Osment as Trevor McKinney, her always energetic and loving 12-year old son. The basic plot outline is "how can you make the world better?" In this case, it's in the form of a social studies assignment given by Trevor's teacher his teacher Eugene Simonet. Trevor (who is always trying to change the world in some way) takes the assignment with both hands and never looks back. Personally, I thought the film was brilliantly done, with the exception of the transfer from book to screen, a lot of things were changed from the book, and I think if they had kept more from the book, perhaps it would have gotten better reviews.  However, the performances, direction, editing and music were all top notch and I recommend the film.

For this drama, composer Thomas Newman was called in right off of Erin Brockovich so naturally, he went with his great rhythm and percussion and rich orchestra use. For his past three films (American Beauty, Erin Brockovich and now Pay it Forward) Newman has been using more rhythm and percussion in his music, some people like it and others don't.  I myself am still a bit undecided in that area. While the music contains the rhythm and beat of his other "new style" scores, he also lays on the orchestra in this one. There are very few tracks with his blaring rhythm and percussion cues in it like there was in Beauty and Brockovich. They are right in the beginning, middle and end of the album, and they serve as a nice refresher to his orchestral work, which is not really that uplifting, similar to his work on The Shawshank Redemption.

I thought it was an interesting approach the way he did this score, it was not a carbon copy of his other "new" and "old" style scores, but a mix of everything he has done (or that I have heard anyway) and it seems to have clicked with me.  I of course loved the film, so I am sure that had something do to with it. But I think the balance between his rhythm and orchestra tracks helped; it was not blaring through the whole CD.

If I had to dislike anything about this score, it was that it sounded just like his two most recent works. Also, the score is on the little depressing side, the music is not really a "pick me up" score.  The bottom line is if you're a fan of the film or of Thomas Newman you are most likely going to like this album.  For a non-fan or someone who is just getting into film scores, then I'd see the movie, or listen to a few more Thomas Newman CDs before I pick this one up.