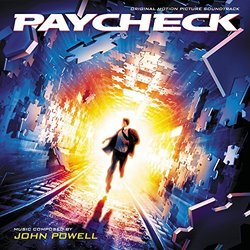 In Paycheck, director John Woo adapts a Philip K. Dick story about a reverse engineer (Ben Affleck) who after completing a top secret job has his memory wiped (to prevent him from knowing the trade secrets he uncovered in his work).  Except that this time, instead of payment he has an envelope filled with 20 items that he apparently mailed to himself.  Now, with people trying to kill him, he tries to put the pieces of the puzzle back together and figure out what it was that he worked on.  The film was rather entertaining, although it lacked the emotional depth of some of Woo's earlier films.  However, the action sequences were quite exciting, aided in no small part by John Powell's kinetic score.

As evident with the first track, "Main Title", the soundtrack release to Paycheck is comprised primarily of a combination of orchestral music with synths and electronics.  The main theme can be heard in the title sequence, as well as a mysterious arpeggio that builds through the cue.  Parts of "20 Items" feels a bit like a variation on some of the work Powell did previously for Woo in Face/Off, and in a sense, that feeling of homage (intentional or otherwise) made me feel a bit more "comfortable" with the score.  Suspense slowly builds through "Wolfe Pack" and "Crystal Balls", with the returning arpeggio motif.  Much like his earlier score to Agent Cody Banks, Powell's music is crisp, clear, and has a delightful sense of playfulness, as evident in "Mirror Message".

"Imposter" gives us a mysterious piano-based melody, slightly reprised in "I Don't Remember" which is probably the slowest cue on the album.  It's a calm track, and it ends with a nice reprise of the main theme, performed on the piano.  This comes right after "Hog Chase Part 1" and "Hog Chase Part 2", so it's a much needed break.  These two cues comprise a rather exciting motorcycle chase in the film, and it's also the type of cue that Powell is just exceptionally comfortable with.  Flaring brass, hard percussion, electronics, atmospherics, and a playful orchestra all factor heavily into his musical palette.  It is because of musical sequences like this that remind me why I really enjoy Powell's music.

"Future Tense" and "Fiat Accompli" comprise a lengthy 13 minute long sequence, over the climax of the film.  As such, the music runs the gamut, from tense build-up, to action, to romantic denouement.  "The Finger" is a bit of a dramatic action-heavy capper that runs a scant 30-seconds, but allows the album to finish in a big way.  Almost like a bonus cue of sorts is "Rachel's Party", a string quartet version of the main theme that shows up as source music during the film.  It's a pleasant inclusion on the soundtrack, although I might have placed it earlier on the disc.

Paycheck was not well received by critics and audiences, although it might find new life on home video.  However, don't let the lack of a substantial box-office dissuade you from checking out the soundtrack release.  If you're a fan of Powell's other works such as The Italian Job and The Bourne Identity, then you'll be glad to know that Paycheck is a worthy successor and a fine addition to your collection.