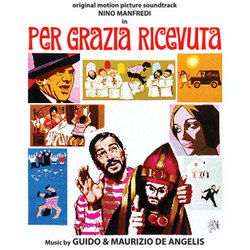 Digitmovies is pleased to present, for the first time on CD, complete edition, the OST of the Guido & Maurizio De Angelis brothers for the movie Between Miracles directed in 1970 by Nino Manfredi.

This OST marked the début in the world of soundtracks of the legendary De Angelis brothers; in 1971, IT Dischi released an album (It ZSLT 70.002) containing fifteen tracks in stereo (28:34), two different single tracks in stereo with the songs "Per grazia ricevuta", "Me pizzica me mozzica", "W. S. Eusebio" performed by Nino Manfredi (It ZT 7010 - It ZT 7014).

For this CD, in addition to the stereo master tapes of the original album, we have also included the single version of "W S Eusebio" sung by the protagonist, and we also had access to the mono master tapes of the recording sessions that allowed us to include every note recorded for the film (37:40) with the total time of 69:56.

The De Angelis brothers have written a main theme for the protagonist who is softly introduced by a female voice and then explodes with the whole orchestra in a pop song, alternating with the funny dialect "Me pizzica me mozzica" song to the grotesque sacred "Viva Sant'Eusebio" (in both single and alternate take for the film) and a poignant love theme for guitar, flute, strings and choir. One of the most beautiful music themes for the cinema ever.