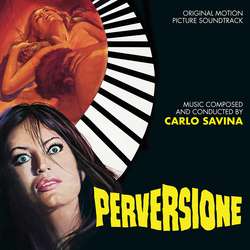 Corrado Prisco's Stress stars Lou Castel who carved out his own niche in playing troubled youth – this time, a young university student who returns home, but the political indoctrinations at student rallies might have sent him too far down the rabbit hole… Savina's score is quite short and is largely characterized by a baroque feel reinforcing the ideas of the prodigal son's returning with children's vocals, lullabies and a cembalo. The main and end credits featuring Edda dell'Orso are available for the first time as they were replaced with classical and folk music respectively.

Mastered by Claudio Fuiano, the CD comes with 8-page booklet with Gergely Hubai discussing the films, the composer and the scores.