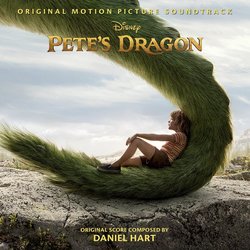 When I saw that Daniel Hart, a relatively unknown and young composer, was set to score one of Disney's summer releases, I was skeptical. But, I must say after seeing the film I have only one question: When and what is Hart's next score?

Pete's Dragon is a childhood classic from 1977. In this 2016 live action remake, director David Lowery took a 'dopey' live action/animation film and transformed it into a beautiful display of heart, adventure, magic, and love. Written by Lowery and Toby Halbrooks, the film tells a story of a boy, Pete, who is separated from his parents and finds comfort and protection in a mystical green dragon in the forest.

The score contains eight song tracks as well as twenty orchestral tracks, some of the highlights being: "Reverie," "Elliot Gets Lost," "Saying Goodbye," and "The Bravest Boy I've Ever Met." These tracks highlight key moments of the piece as well as best capture emotions from the film.

Throughout the film there are four strong themes/melodies: the family theme, the playful theme, the lost theme, and the flying theme. These themes are well represented during the course of the film adding depth to the story and characters. The family theme is first introduced in the first cue "An Adventure." Much of the theme is hidden, but it displays a calming and warm color. Although we do not have a strong connection to Pete's parents, the audience can clearly feel his admiration to be a part of a family. This family theme returns most prevalently at the end of the film in "Saying Goodbye."

It's a great joy to see Harts consideration for the films characters and emotion. The playful theme clearly embodies a joyful, fun‐loving attitude which Pete and Elliot possess. In contrast, the lost theme helps describe the sheer size of Elliot as a dragon; Hart using massive, sweeping chords to convey the sadness both Elliot and Pete feel throughout the film. For example, in the cue "Elliot Gets Lost" we are reintroduced to the lost theme which was first played in "An Adventure" (when Pete was lost from his parents before meeting Elliot). This theme is massive in the sense that it represents a Dragons sadness for the one he loves most. Hart made a conscious decision to contain the lost theme within simple, slow‐moving, heart wrenching chords which convey the heavy emotions. The music is an amazing representation of a warm body of sound which melts our hearts as we see the tears in the characters eyes.

This score revolves around the beautiful melodic invention of the flying theme. Within one melody, Hart captures all that Disney represents. This unforgettable theme is a grand display of heroism, happiness, love, youth, and imagination—and is truly the 'bread and butter' of the score.

On the other hand, away from the grand scenes and large melodic music, the score does lack creativity in its more subtle moments. In many of the films more subtle, dialogue-driven scenes the music is quite dry, lacking in quiet excitement and flavor. It seems that Hart may have focused more time on the melodic moments in comparison to the quiet incidental ones; forgetting that just because the music is not as loud, does not make it less important for the film.

Nevertheless, Hart delivers a magnificent score. His display of melodic invention is second to none in a time where film music has been bogged down with heavy bass and repetitive ostinatos. Hart's score proves he is a worthy contender for Hollywood A‐list movies and I look forward to his next film score.