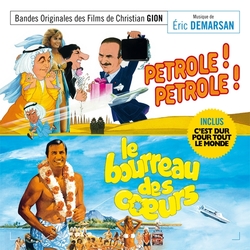 C'est dur pour tout le monde tells the story of Dan Letellier (Francis Perrin), an ambitious up-and-comer, who is in competition with his former boss Paul Tardel (Bernard Blier), a tycoon of the advertising sector. Eric Demarsan composed two different themes: one for the action sequences, a melody played by clashing strings backing up a boastful solo trumpet, with the addition of a piano in the low register; the other one for the romantic moments.

Pétrole ! Pétrole ! deals with the second oil crisis in 1978, using a humoristic tone. An Arab emir, Emir Abdullah (Bernard Blier), finds his lost daughter, Liza (Catherine Alric) who becomes the new heiress to his fortune. She is married to Bernard Bérian (Henri Guybet), a young fuel seller who is a competitor and worst enemy of the emir's largest client, Jean-Marie Tardel (Jean-Pierre Marielle) attempting to woo Emir Abdullah. Éric Demarsan composed a bright theme played by a dynamic brass section. The score displays a wide range from the universes of Western movies, the circus and the Arabian Nights.

Le Bourreau des cśurs tells the story of Vittorio Garibaldi (Aldo Maccione), an extra who dreams to become famous and becomes a star idolized by the public, seeing his childhood dream suddenly come true. He is hired by a producer to become the stunt double for a movie in Tahiti. Éric Demarsan wrote a lively theme to follow Garibaldi's ascent and based his score on nostalgic and light comic material.

The three scores have been fully mastered and expanded from the scoring session elements. The package includes an 8-page booklet featuring exclusive liner notes by writer Gilles Loison and new comments by Éric Demarsan and Christian Gion on their collaboration.