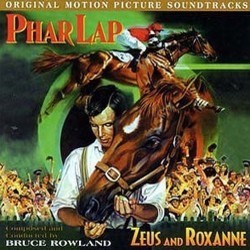 Bruce Rowland has composed and conducted two lovely film scores, which have been combined onto one promotional Compact Disc for our listening pleasure.  The first film, Phar Lap, is a definitive horse-lover movie and is based on the true story of a famous Australian racing horse.  The story focuses on Phar Lap, a non-pedigree horse that is trained by stable boy Tommy Woodcock (Tom Burlinson) and goes on to win several big races.  Although the movie never directly points a finger, it strongly suggests that the unstoppable Phar Lap was murdered by corrupt gamblers.

The score for Phar Lap is nothing short of beautiful. "California 1932" opens the movie with numerous elements that flow together nicely.  This piece begins softly with a piano and classical guitars, which are then accompanied by woodwinds, strings, and a harp!  The music graciously assists the film's visual elements in transporting the viewer back in time to when Phar Lap's legend was born.  While most of the score continues to use similar musical elements to paint its acoustic masterpiece, "The Sand Hills" begins with an electric synthesizer and bass that quickly escalates with percussion, piano and plenty of other goodies to create a horse's Chariots of Fire. "Training in the Desert" and "Agua Caliente" rely heavily a mariachi influence to set the tone as the film transitions from Australia the Mexican desert for the racing finale.

If there is anything bad about this score, it comes in the form of a slight error during the production of the Compact Disc where "The Legend", which is the last track of Phar Lap, was mistakenly labeled as the first track of Zeus and Roxanne.  Although some fans may treat this error as a false pregnancy, remember it is the creativity of the composer and orchestral performance, as well as how the musical tone supports and paces the film, which makes the album great.  Set your CD player to "Random" and you'll never know the difference.

Zeus and Roxanne is the second film score featured on this collection.  While the music is good, the theme is more lighthearted and comical when compared that of Phar Lap.  Having both film scores on the same CD helps the listener to observe the wide range of Bruce Roland's skill as a composer.

Zeus and Roxanne follows the story of interspecies communication between a dog (Zeus) and a dolphin (Roxanne).  Marine biologist Mary Beth (Kathleen Quinlan), who is studying Roxanne, becomes intrigued by this odd mix and decides to study this animal friendship.  Claude (Arnold Vosloo) is the villainous researcher who decides to steal Mary Beth's research for his own greedy ideals.  Terry (Steve Guttenberg), the owner of Zeus becomes Mary Beth's love interest throughout the course of events.  While the story tries to incorporate the love story into the plot, let's face it, we really just want to see the dog and dolphin do some cool animal tricks.

The film score for Zeus and Roxanne contains Phar Lap elements in some of the early tracks "Opening / Day Trip" and "Zeus Arrives / Carver the Spy".  These pieces feature a familiar subtle mix of piano, classical guitar and percussion fading in and out with some strings and other instruments filling in.  "A Case of Rum / Carver Captured" takes us on a musical journey from a drunken stupor to a more suspense filled movement that builds and ends quickly.  "Shark Attack / Stranded Sub" wisely uses percussion and strings to build tension when Mary Beth finds herself in a flooding submarine during one of the more suspenseful portions of the film.

While I enjoyed this collection of film scores more for the triumphant sounds of Phar Lap, I was pleasantly surprised by the nature and quality of the Zeus and Roxanne score as well.  Soundtrack lovers should enjoy adding this piece to their collection, and can get the promotional album at http://www.percepto.com/