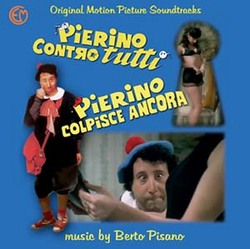 The film's story revolves around a boy who enjoys pulling everyone's legs. Despite the simple story, Pierino Contro Tutti was one of the mostsuccessful movies at the box office in 1981, which was a rather unfortunate year for Italian cinema. It earned ten billion lira, when at the time, a movie ticket cost only 4000 lira.

Berto Pisano belongs to that category of Italian composers who were underrated despite their prolific output. Between the 60s and the 80s, he composed many scores that were far superior, artistically, to the movies for which they were written. Pisano's style is similar to such colleagues as Gianni Marchetti, Stelvio Cipriani, Franco Micalizzi, Nico Fidenco, Piero Piccioni, and sometimes even Gianni Ferrio—composers who were very active during that period.

For many of the scores he composed, Maestro Pisano made use of up-tempo rhythms and sounds, sometimes melding more expansive orchestral sonorities and even incorporating jazz stylizations. In addition to underlining the on-screen action, his music often takes on a life of its own apart from the films. Pisano composed a lot of scores, and recently his work has become one of the most sought after among European film music collectors. Nowadays, he is finally appreciated not just for his arrangements but also for his wonderful compositions.