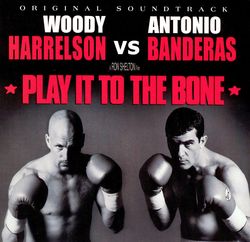 Play It to the Bone

Review: Play It To The Bone

Wow! Let's get funked up! I must admit that I had no intention of seeing this film before I heard the soundtrack. The unlikely posing of Woody and Antonio as prizefighters claims the same gritty realism as Madonna taking on the role of Mother Theresa. I definitely will rent the film now, though, if only to see (and hear) how they use this rich music against picture. So… on to the music.

Pop the CD in and let track #1 begin: "Shakey Ground" by Fishbone. This track will not disappoint you. Your head will be bobbing, feet will be shaking, and with the nearly uncontrollable desire to boogie, you too will be standing on shaky ground.

Track #2, "Lovely Day" by Kirk Franklin, is laden with gospel harmonies and imitation. "Take me to church or lose me forever, baby." Or something like that.

I could go on here and simply list the tunes and everything I liked about them, but music like this isn't something we should talk - or write - too much about. The music on this soundtrack comes from way down deep… from the swamps, from the Bayou, from the tiny, gin-soaked hours at the other side of midnight on Beale Street.

While I can't quite picture Antonio 'I'm beautiful' Banderas (Don't get me wrong. I do like him. He's done some outstanding work.) as a prizefighter, I am thankful to the casting gods for putting him in this picture. Why? Well, his presence calls for the use of some Latin music. Los Lobos and Gipsyland each have superb offerings on the disc, "Corazon" and "Viva La Musica", respectively. With the Latin explosion in the pop scene witnessed since Senor Ricky (a.k.a. Enrique Martinez - a.k.a. Ricky Martin) wiggled his ass on the Grammy's, the inclusion of timbales and percussive Spanish vocals in projects has increased ten-fold. And that's a good thing, friends.

Moby has a nice cut on here. Admittedly, I don't know too much about Moby or techno music for that matter, but I do like his stuff. Maybe the early days of the style turned me off with the endless repetition and the seeming lack of understanding of dynamics and pacing. To me, techno seemed like the engineer's dream music, i.e. "Hey, I AM a musician!" Thankfully, Moby knows his way around more than just the rhythmic component of music.

A wonderfully rich tapestry of tone called "On The Road" by composer Alex Wurman and the quietly inspirational, and beautiful, "Here's To Life" by Jacintha close out the collection. My recommendation? Buy the CD now! Run, don't walk. You won't be disappointed.