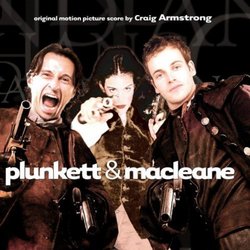 Plunkett & Macleane was in US theaters for about as long as it takes one to get to the theater, so it really didn't do much business. There are some who'd say it didn't really do any business, and I'd be hard-pressed to disagree. Perhaps it will have a rebirth on home video, or perhaps it will remain forgotten. Thank goodness that Virgin Records saw fit to release an album to this "underrated" film.

My synopsis of this score is simple; perhaps a bit over-simplified—in a word, "wow!" Craig Armstrong has my vote for most important new voice of 1999. This, The Bone Collector, and the almost-as-obscure Best Laid Plans proved to be some of the most ear-opening work of the year. For Plunkett, he begins the album with some heavenly choral music similar to the exquisite finale from The Bone Collector. Being a sucker for choral music in almost any form, I was drawn in by this "Hymn," originally from his "The Space Between Us" album. "Unseen" is, for me, a treading-water cue—it nicely fills the downtime between the "Hymn" and the wonderful lyrical cues that follow it—"Ruby" and "Rebecca."

What strikes me most about Armstrong's music is his ability to so ably combine "classical" and "pop" music traditions without really giving preference to one or the other. A fine example of this is "Ball," which adds a very modern dance beat and echo effect to a piece which is, at it's core, very Baroque and restrained. This style is further exemplified in "Business," another fine track. Much of what follows this is rather quiet music, some of it along the lines of the two feminine cues previously mentioned.

What surprised me most about the album was Armstrong's ability to outdo such a wonderful opening with an action cue lasting just over a minute—"Escape." Here, all the elements of the score are drawn together—the epic choir, the orchestra, and the driving electronic beat—to create a cue which demands use of the "repeat" button. "Houses In Motion" is a cover of the classic Talking Heads song—and aren't they all classics to somebody? —and while it doesn't exactly fit the style of the rest of the album, it's a pretty neat cover. As for "Childhood," it also harks from "The Space Between Us," and is also quite lovely, and brings the album to a satisfying close.

Plunkett & Macleane is one of the most surprisingly original and listenable albums of a 1999 score, and shows—along with The Bone Collector and Best Laid Plans—that Craig Armstrong is a composer from whom we can expect great things in the future. I, for one, can't wait.