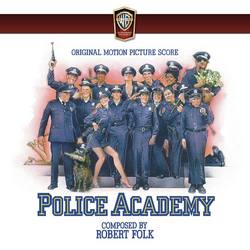 Composer Folk's military-march-infused score finds the perfect blend of broad comedy, urban action and endearing character to expertly support what would become an indelible 80's comedy classic. In the process, Folk created one of cinema's most enduring main themes!

Produced by Robert Folk, Matt Verboys and Neil S. Bulk and mastered by Doug Schwartz, this special limited release of 3000 units features the bonus track "El Bimbo," performed by Jean-Marc Dompierre and His Orchestra (used in legendary fashion for the film's Blue Oyster Bar), and in-depth, exclusive liner notes by film music writer Daniel Schweiger, which include comments from the film's composer, producer and director. David Fein's art design salutes the new recruits! Commandant Lassard agrees, "This is a very, very, very wonderful score, which you will enjoy many, many, many times over!"