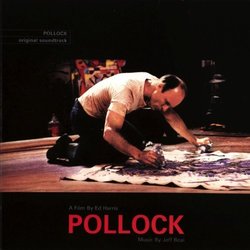 In a recent film music discussion with a friend of mine, he stated,  "Everyone's American sounds like Copland."  To an extent this is true; after all, Copland largely defined the sound of American symphonic music, and his stylistic shadow is a very large and imposing one that is nigh impossible to crawl out of.  Instead, it tends to be easier to write within it.  Still, there's room for variation, and Jeff Beal does a splendid job with this on Pollock.

This is a score that excites me with every listening.  It is at once thought-provoking and superficially entertaining.  This is a chamber score at it's best; an exercise in the unique interaction of musical timbres (including an orchestral banjo, a la Antheil) and heavy rhythmic drive.   "Alone In a Crowd" immediately establishes a downright boisterous pace, it's repeating string pattern laying the groundwork for melodic germs rather than actual "statements."  In "Stroke of Genius," the score gets into some downright rock-'n'-roll moments, and it's more than welcome.  Beal approaches the material in the manner of a true jazz-loving post-minimalist composer, and I was at times reminded of early John Adams while listening to the disc.

Admittedly, I have not seen Pollock.  I don't know how well any of this works in the film, but on album, it has come as a very refreshing finale to a somewhat lackluster year in film music.  Yes, some of the slower bits are not the most interesting—the "new-agey" style is nice, but when it's book-ended with such wonderful fast music, my attention tends to be diverted forward or back on the disc.  Tom Waits' song, "The World Keeps Turning," is a different bird altogether.  With it's mix of detuned piano, banjo, and Waits' deliberately unrefined voice, the song initially struck me as something to pass on.  Further listening, though, will reveal it as a rather heartbreaking number whose quiet intensity has sparked my interest in Waits' other work.

All in all, Jeff Beal's work on Pollock is stirring, entertaining, and effective.  Whatever stylistic debt it owes to Copland, it pays off happily in its opening bars, and proceeds to delight across the board.  Highly recommended.