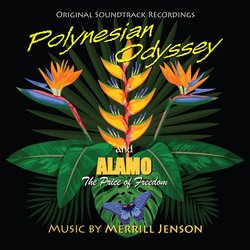 Performed by
The National Philharmonic Orchestra of London

Dragon's Domain Records, to be distributed through buysoundtrax.com presents the original motion picture soundtrack to the IMAX films Polynesian Odyssey and Alamo: The Price of Freedom, both composed by Merrill B. Jenson and performed by The National Philharmonic Orchestra of London.

Merrill B. Jenson has specialized, not entirely but in large part, in documentaries and IMAX films shown at museums and American historical sites. The film scores collected on this album are excellent examples.

The 1988 IMAX film, Alamo: The Price of Freedom had been commissioned for The Alamo historical site in San Antonio, Texas, where it was shown for many years. Jenson counts this score among his own favorites. The main theme that opens and concludes the score is a breathtaking piece of music, with an elegant structure that reflects a sense of Americana through its harmonic phrasing, while reflecting with the military connotations of the battle via a martial snare drum; it is a score that breathes heavily the elegance of pastoral Americana.

1991's Polynesian Odyssey, also filmed in the IMAX format, was commissioned by the Polynesian Cultural Center to be shown at its theme park and museum in Laie, Oahu in Hawaii. Through vivid, majestic images, Polynesian Odyssey told the history of the Polynesian Islands and their peoples; Jenson's score matched the film's grand, large format visuals with vivid, eloquent music, from the pageantry of its resplendent choral excursions to the historical and ethnic flavorings that support much of the music's layered orchestrations. Both Alamo and Polynesian Odyssey were recorded in England with The National Philharmonic of London.

Working on these nonfiction films, and many others, has given Jenson an intuitive respect for history and cultures other than his own. Writing emotionally-tinged music for significant events in human history provides a unique sense of fulfillment, and has inspired music that is both meaningful and cinematically effective. "It's been rewarding to help viewers realize the greatness of the migration of the Polynesian people, and the greatness of their culture. And with Alamo, the stories of heroes who died for our country should be told. I am proud to be part of both of these stories."

Dragon's Domain Records is excited to bring these excellent scores to compact disc – Alamo as a reissue, Polynesian Odyssey for the first time. Both scores have been mastered by James Nelson at Digital Outland with exclusive liner notes by author Randall D. Larson, with the participation of the composer.