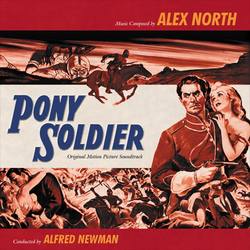 Alex North was absolutely exploding with musical ideas when he emerged on the Hollywood scene in the early 1950s. His 1952 score for Twentieth Century Fox's Pony Soldier is a sprawling work that even offers glimpses of some of North's greatest scores to come. Much film music history grew from the seeds planted in this film. A long-requested early North score from a historic period in Fox studio history, we are very excited to offer this special premiere release of Pony Soldier.