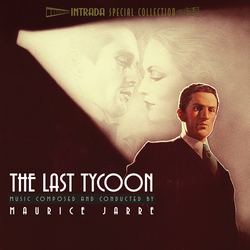 For Posse, Maurice Jarre's score is one of his most interesting of the period, using an echoplexed trumpet and flute effect similar to the one Jerry Goldsmith employed in Patton. But where Goldsmith used the effect as an echo of past glories, Jarre's music captures Marshal Howard Nightingale's pomposity, his delusions of grandeur, and the way he cloaks himself in patriotism.

In contrast, Jarre's picaresque music for Nightingale's nemesis is based on the same material as Nightingale's, but where Nightingale's music bursts with patriotism and self-confidence, Strawhorn's is almost comically morose, with flute counterpoint providing sympathetic shading to the character—it's an incisive portrait of a dogged, reluctant hero. Jarre thus links Nightingale and Strawhorn as two sides of the same coin.

Maurice Jarre took a sparse approach to The Last Tycoon, with less than 25 minutes of original music playing during the movie's two-hour plus running time. With Robert DeNiro's character seeming deliberately remote and enigmatic, Jarre avoided underscoring the character's day-to-day work at the studio and instead focused on Stahr's interior life.

The lonely main theme speaks to Stahr's desire for something outside his work life and to his growing romantic obsession with Kathleen. Jarre's music has a subtle period feel, with solos for clarinet and saxophone. Apart from the main and end titles, Jarre only underscores scenes where Stahr is interacting with or, presumably, thinking about Kathleen, making their relationship the one window into Stahr's personality and psyche. Since it frames the film, Jarre's elegant theme also provides a reflection of Hollywood glamor and romance.

The 2" 16-track masters for both works were restored and newly mixed into two-channel stereo by the expert team of Lukas Kendall, Neil S. Bulk, and Michael McDonald of Private Island Trax. The resulting sound, particularly the brass in Posse, is dynamic and crisp.