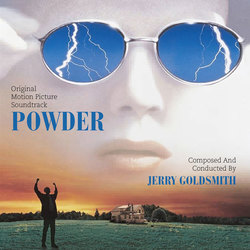 In a way, the 1995 Hollywood Pictures film Powder became the apotheosis of Jerry Goldsmith's career. Goldsmith's natural abilities shone in many sequences of the score, particularly in his construction of a main theme that was capable of being stated in numerous gentle guises throughout the film and yet could still take on wholly operatic force at the film's messianic finale—a climactic sequence that probably only Goldsmith could have scored.

Goldsmith and his long-time engineer Bruce Botnick selected just 35 minutes of music for the 1995 soundtrack album. For this restoration of the entire score, Intrada was given access to the five days' worth of 48-track digital session recordings, allowing Intrada to include everything from that earlier album plus another half hour of music. Among the new material is the all-important and warm sequence when Powder is first brought out from his grandparents' basement into public view ("The Books"/"You're Afraid") as well as the frightening "Jacob's Ladder" sequence in the science classroom. In fact, none of the first five tracks, including the introductory main title ("Emergency Room"), were included on the original album. As a result, Intrada is proud to expand this haunting and ultimately powerful score to its full 65-minute length, bringing new depth to the numerous ideas and styles the music offers. These range from warmth to sadness, from outdoor richness to terrifying fear... all culminating in a magnificent, grand, operatic peroration the likes of which Goldsmith rarely was given the opportunity to do.