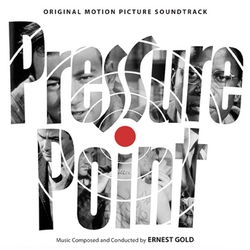 To score Pressure Point, director Stanley Kramer turned to his frequent composing partner, Ernest Gold. His score is as surreal and weird as the film is—and it's a phenomenal piece of work, breathtaking in its ability to set the mood and especially underscore the sick mind of the Bobby Darin character. In fact, the score, too, would be right at home in an episode of The Twilight Zone—if one is a fan of that show's scores.

It's jazzy, nightmarish, crazy music and though 1962 was a year filled with some of the greatest scores ever written, it stands tall with the best of them—even though the film and the score are today almost virtually unknown. Hopefully, this CD will put that to rights, at least as far as the score is concerned—for Kritzerland, this is a Holy Grail release.

This world premiere release features every note of music written for the film, and the CD has been mastered from Mr. Gold's personal tapes, which sounded fantastic in their original mono.