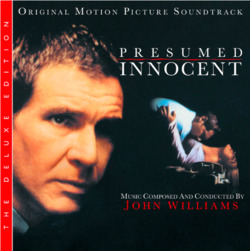 Presumed Innocent, the debut novel of Scott Turow, was a bestseller upon publication in 1987: a twisty, ultra-smart account of a prosecutor investigating the murder of a brilliant colleague with whom he was having an affair - and all clues point to himself as the perpetrator.

By 1990, John Williams was a worldwide icon for his soundtracks to blockbusters - but he was a master of every possible genre, including the unique combination of crime thriller and courtroom drama that was Presumed Innocent.

Williams created a haunting, beguiling score of subtle piano, noble yet melancholy French horn, churning strings and even a wisp of synthesizer to express the film's exploration of guilt and innocence, virtue and obsession. It is an exquisitely subtle score, but melodic and stimulating—and dramatically pitch-perfect.

Presumed Innocent was released by Varčse Sarabande at the time of the film, and has now been expanded and remastered by Mike Matessino in a new program of the complete score, followed by unique album versions and alternates. New liner notes are by Jeff Bond.