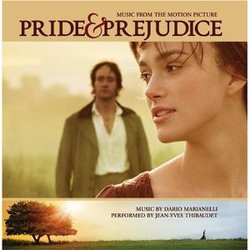 In my review of Lord of War, I mentioned that talking about exotic instruments, actually, that the mere act of trying to name them without resorting to liner notes is the equivalent of taking a stroll down a mine field. Unless you have a degree in musicology, reviewing a score which draws heavily from classical music can be equally catastrophic. It's all too easy for a reviewer to throw in words like "Beethoven" and "the Classical period" (oh, and let's add "sonata" as well). Then comes the flurry of emails like snowflakes in a winter storm, "Well, you mentioning Beethoven wasn't exactly accurate, it's closer to...", and, "This particular piano technique was actually developed by..., years after the composer you alluded to had died", and, "What do you know about classical music anyway? Go back to your 9-to-5 job of stacking canned peas on shelves!"

I do not have a degree in music history or composition. My knowledge of Western music is limited to two basic courses in music composing and one in music history that I took as electives as an undergraduate student. It should come as no surprise, then, when I say that, after listening to Dario Marianelli's score to Pride and Prejudice (yes, another Pride and Prejudice movie), I hit the Internet to see if I could say the name "Beethoven" or, perhaps, "Chopin" without being hit in the face by that very demoralizing flurry of emails. I saw people comparing Pride & Prejudice to Beethoven's early Romantic work. I read about others vilifying the first and dropping "Purcell", "Chopin", "Schubert" as more viable alternatives. I even saw someone remark that impressionistic techniques were used to represent Liz Bennett's pioneering personality. Those touches of rubato, such as two minutes and a half into "Your Hands Are Cold", I had noticed, as well as the distinct influence of Chopin's work on "Dawn." But I'm afraid my musical knowledge isn't up to snuff to compete with these guys and I won't even try.

I am left with very little to say seeing as most other websites have already published lengthy reviews of the score. I could copy elements of these reviews and upchuck them here, but I'll leave that to less talented individuals. What I'll say is this: Marianelli proves again (after The Brothers Grimm, you'll remember), that he is a composing force to reckon with. His romantic music here is entrancing and masterful: he benefits from virtuoso piano performances but, even apart from the performances themselves, the writing is impressive and beautifully layered. Those grand, Kleenex-sponsored moments are not scored solely with lovely harmonies for the string section; Marianelli adds rapid passages for the piano that are, quite simply, breathtaking. Most people agree that "Your Hands Are Cold" is a highlight of the album and why not? Celli, basses, and trumpets call upon an energetic (even equine) rhythmic ostinato complemented by cyclic figures on violas, violins, and woodwinds, and that's before the strings join forces with the piano ascending and descending up and down its scales in Romantic mode. This track is superb, but the rest of the album is equally strong and remarkable, adroitly mixing theme-based chamber music and period source music, such as dances ("Meryton Townhall", "Can't Slow Down", the latter featuring a catchy accelerando) and military band marches ("The Militia Marches In").

Whether or not you know your Chopin from your Beethoven will have very little impact on your appreciation of the score to Pride & Prejudice. As long as you are not turned off by "that classical music," you should find Marianelli's music profoundly emotional and, quite simply, beautiful. "Mrs. Darcy" ends with a reprise of the theme introduced in "Dawn", for solo piano, and I don't care if it's Purcell or Schubert who would have cried "Thief!"; it's quite enjoyable all the same.