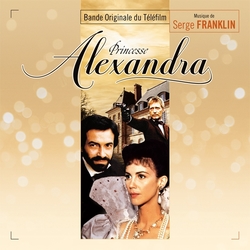 Serge Franklin composed an epic and majestic symphonic score for choir and orchestra, in the continuity of his previous work on A Tale of Two Cities (1989) and L'Enfant des loups (1990). The whole score is dominated by a theme full of aristocratic restraint that shrouds the character of Alexandra in an ample veil of notes. The film's numerous twists and turns, such as the chase and duel scenes, allowed the composer to write more lively pieces. The FYSIO Symphony Orchestra and Kuhn's Choir have been recorded and conducted by Mario Klemens in Prague.

The soundtrack debut of Princesse Alexandra has been fully mastered from the recording session tapes. The 8-page booklet features an essay by Sylvain Pfeffer discussing the film and the score based on an original interview with the composer.