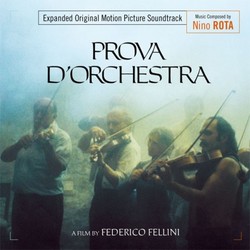 The highly unorthodox score by Nino Rota effectively features a rehearsal and performance of three pieces. The original LP featured a sound collage on Side A and the pieces on Side B - but with dialogue inserts and instruction from the cinematic conductor. This marks the first ever complete release of all the music recorded for the film, some cues conducted by Carlo Savina, others by Armando Trovajoli. Supervised and produced by Claudio Fuiano, the CD album contains the original remastered LP program (including the audio collage of the interviews) as well as the 10-minute music only suite compiled for the 1991 CD release and present on all re-issues ever since. Additionally, there are about 16 minutes of previously unreleased material, featuring unused and alternate takes of Rota's cues (tracks 9 to 16). This present edition has been carefully remastered from the original recording sessions.

The booklet features liner notes by Gergely Hubai, discussing the film, the score and the last ever collaboration between the legendary Federico Fellini and Nino Rota. This is a limited edition of 500 units.